Moving Beyond Band-Aids at Berea College 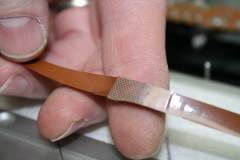 The format distribution among Berea College’s 18,000 plus non-commercial audio and video holdings is about a third each, 1960s-1970s era open reel tapes and audio cassettes, and a final third divided about evenly between VHS and half-inch open reel video tapes and 1930s-1940s era lacquer discs. While not large compared to major university recordings archives, Berea’s is also not small and contains collections with higher long-term research value than holdings found in similar-sized college libraries.

Administratively, these collections are part of the college library’s Department of Special Collections and Archives. As does the Department’s manuscript and print collections, the audio / video recordings document both Appalachian history and culture and the history of the College. They are especially strong in the areas of traditional music, religious expression, spoken lore, radio programs, oral history, and College events and personalities. These collections include field recordings from homes and churches, local and regional folk festivals, student performances, and presentations of notable scholars, preachers, and social activists who have visited on campus.

Preservation and access measures for several years prior to 2005 involved maintaining good storage conditions and providing audio and video cassette use copies of the reel and disc based originals. That year, recommendations arising from an independent preservation assessment and an unexpected private grant coincided to make possible an in-house digitization program that focused initially on audio tape and eventually radio station lacquer discs.

Grant funding made possible hiring a library oriented digital audio technician, purchase of professional playback machines, related hardware / software and construction within the library of a critical listening space where monitors could be used at an appropriate volume to facilitate the playback and recording decisions that are made in the digitization process. Later grant funding also made possible outsourcing video digitization, a streaming server, and a MAC workstation using Final Cut Pro to process digitized video for online access. 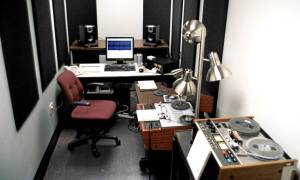 Key elements of Berea’s IASA guided digital preservation and access efforts include converting the original analog audio recordings to high resolution digital files stored on a dedicated server with remote backup. For each video recording there is a 10bit uncompressed preservation file, a DV50 access master, and an mp4 streaming file.  CD / DVD reference copies are made for Library use and an online portal provides access to contextual guides and searchable online databases of collection contents and selected audio and video files. Items digitized to date by format include 2,500 audio reels, 2,000 audio cassettes, 740 video reels and cassettes, and 845 lacquer discs.

Our major challenge, both near and long term, is in the area of sustaining digital storage capacity. We began in 2005 with a 500 GB server that had been sitting idle in the college’s fairly small IT department. Our suggestion that we soon could need at least a terabyte for audio file storage was initially a concept the IT staff had difficulty accepting.

To date, we have moved through three storage migrations to the present 10 TB capacity, funded variously through grants and the regular Library budget. This expansion was driven initially by an in-house audio digitization rate of about 350 hours / 700 GB per year.  Newly funded video and additional audio digitization through outsourcing is presenting the need for a yet more sizable addition to storage capacity on the order of 30-40 TB.

The present 10 TB server is about two thirds full, with sizable audio additions yet to come. A likely approach being considered for meeting this need is using off-site tape based storage for the uncompressed video preservation masters while keeping access, streaming, and audio preservation files on campus with the view that resources and effort need to be shifted to focus more on access issues.

Administering our media storage needs has been and continues to be a minor consideration in the college IT department’s universe of priorities.  The coming and going of personnel, department reorganizations, and the absence of a strong customer service culture make advocating for our perspective an ongoing necessity.

None of what has been accomplished would have been possible without the remarkably long term support of the original private donor. That donor is now asking us to work at phasing out major in-house and out sourcing efforts over the next two to three years with the view that resources and effort need to be shifted to focus more on access issues.

Our experience to date and the eventual changing complexion of available funding suggest some near and medium term next steps to take for our preservation and access program. One will be obtaining a preservation assessment for help in thinking through our options for ensuring long term preservation of our digitized collections. More broadly, we will be looking at how best to realign resources – personnel, funds, and infrastructure -to achieve increased capacity for providing timely, meaningful access to our digitized collections.  This will involve such mundane approaches as standard library catalog records along with the latest big thing emerging from the evolving, complex dynamics in social media and information science.

One thought on “Moving Beyond Band-Aids at Berea College”

Error: Twitter did not respond. Please wait a few minutes and refresh this page.