The Indiana University Libraries Film Archive was recently invited to join the International Federation of Film Archives. This is a significant achievement for the Archives as discussed in the IU news release, reprinted below.

BLOOMINGTON, Ind. — Members include the Harvard Film Archive, the UCLA Film and Television Archive, the Museum of Modern Art and the Library of Congress. And now, the Indiana University Libraries Film Archive can add its name to that list.

IU’s film archive is the newest U.S. member of the International Federation of Film Archives (FIAF), a collaborative association of the world’s leading institutions dedicated to the rescue, collection, preservation and screening of moving images. Founded in Paris in 1938, FIAF’s mission is to advance the field of film preservation, recognizing the value of the art form both for its cultural heritage and the historical record it provides. 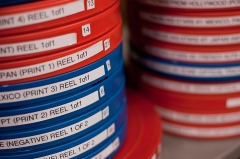 “FIAF membership is a distinction granted to few university collections,” IU Libraries Dean Brenda L. Johnson said. “It demonstrates the outstanding nature of the IU Libraries Film Archives, which contains a number of extraordinary and rare films. Our goal is to enable film scholars and enthusiasts everywhere to benefit from this collection, which is one of the gems of Indiana University. FIAF membership will go a long way toward informing the worldwide film community about this resource.”

IU film archivist Rachael Stoeltje will attend the FIAF annual conference in Beijing later this year, where she will accept the archive’s membership into the organization.

“The IU Libraries Film Archive was formally established only last October, and this membership is a recognition that we have established an archive that meets industry standards for storage and screenings,” she said. “For us, this opens up a lot of funding and international film preservation partnership opportunities that didn’t exist before.”

Indiana University Cinema is a partner in the university’s efforts toward film preservation and access, screening more than 200 films in the past year. About 20 percent of the film prints were borrowed from FIAF affiliate archives, including the university’s own archive.

“This is a big step for the archive,” IU Cinema director Jon Vickers said. “Approved membership validates the effort and resources that the university has dedicated to preserving its significant film collection. Membership will undoubtedly draw more attention to the collection.”

The IU Libraries Film Archive collections now include about 82,000 films, including an educational collection ranging from social adjustment and personal hygiene films from the 1940s to 1960s to World War II propaganda films; the collections of filmmakers John Ford, Orson Welles and Peter Bogdanovich; films from the university’s archives; and more than 3,000 titles from the Lilly Library’s David Bradley collections. 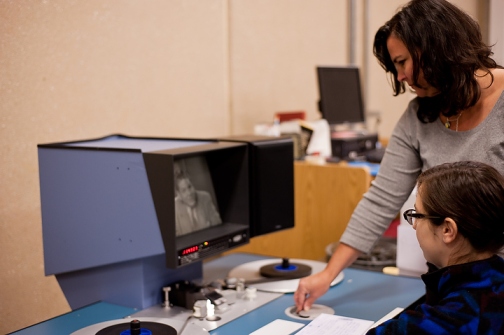 With the establishment of the archive, films from across the Bloomington campus were consolidated into the Auxiliary Library Facility, where they’re kept in a controlled environment of 50 degrees Fahrenheit and 30 percent relative humidity, capable of preserving the films for more than 250 years.

Much of the film archive’s collections are searchable through IUCAT, the IU libraries’ online catalog, and are available for on-site viewing or through a digital streaming service.

« Media Preservation: Student Perspectives
The School of the Sky Returns »