Legendary pianist Menahem Pressler’s 1982 faculty concert performance of Dvořák’s Piano Quintet in A major with the International String Quartet was heard on the Bloomington campus last week for the first time in many years. Carried on three reels of Scotch 208 open reel tape, the performance was the first one digitized as part of the Cook Music Library’s partnership with the Media Preservation Initiative’s Indiana Media Preservation and Access Center (IMPAC) start-up project.

The Music Library holds the largest number of media recordings—more than 200,000—on the Bloomington campus. Well over 50,000 of these recordings document Jacobs School of Music (JSOM) live performances dating from the 1940s to the present. The Jacobs School has historically ranked as one of the finest music conservatories in the world, so when it came time to choose content for the IMPAC start-up project there was an embarrassment of riches and some tough choices to make.

JSOM audio engineer Tony Tadey is working on the start-up project two days per week as part of the Music Library’s collaboration with the Media Preservation Initiative. To select content for the project he drew upon a list of priorities from Music Library staff and the magic of Pressler’s rendition was not only heard again but preserved. It will be accessible via Variations, the IU online audio delivery system where students and faculty can access files for listening.

These recordings are part of a batch of 14 tapes featuring Pressler as well as his Beaux Arts Trio that were chosen for this first wave of preservation action. Because this content is considered of very high value, they will be transferred using a 1:1 workflow. That is, Tadey will digitize one tape at a time, fully monitoring each from beginning to end, to ensure that the resulting files are of the highest quality.

In addition to 1:1 transfers, there are contexts in which a more efficient parallel transfer workflow–the simultaneous transfer and monitoring of more than one source–is appropriate. For the start-up project, Tadey has selected approximately 50 open reel tapes for parallel transfer, all containing University opera performances of Madama Butterfly from the early 1970s to the late 1990s. These recordings are considered good candidates for parallel transfer in part because they are predictable and professional. They contain similar content that is well recorded and placed onto the tapes in similar ways, and they are all the same brand: Scotch 208, a commonly used tape that has no known major issues. 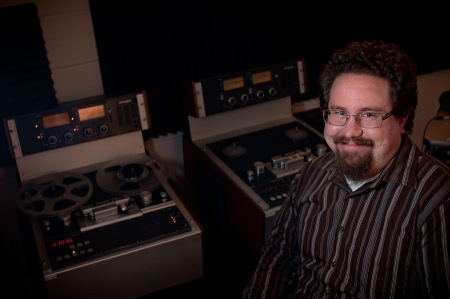 In the parallel transfer workflow, Tadey simultaneously digitizes two open reel tapes (and since all are stereo, four channels of audio) which are then saved as two distinct stereo files. While there are efficiency gains from this method there is also increased risk, so a number of safeguards are built into this workflow to assure that preservation quality work is achieved. This includes monitoring both tapes at all times with smooth automated switching that brings each into focus in turn for a pre-determined length of time. What results are numerous versions of Madama Butterfly that are efficiently preserved and quickly made accessible to faculty and students on Variations for comparative purposes.

Work on Music Library holdings will continue for the duration of the start-up project and into the future after the IMPAC is built.

« The Uses of Enchantment
Building Workflows: The AHEYM Project and DV Preservation »

Error: Twitter did not respond. Please wait a few minutes and refresh this page.