It is a tremendous step forward in everything: story, development of plot, acting, conception, all the way down the line.

The above quote comes from a 1941 recording made in the lobby of San Francisco’s Gary Theater after the northern California premiere of Orson Welles’ landmark film Citizen Kane. The recording, made by radio station KSFO, contains short interviews with Caen, Dorothy Comingore who appears in the film, Claude La Belle of the San Francisco News, and Welles himself. It is one of 253 lacquer discs in the Welles Collection at the Lilly Library, the first recordings we are digitally preserving with the Indiana Media Preservation and Access Center (IMPAC) start-up project. This is the first disc we digitized. It is our starting place—for us, a significant step forward. 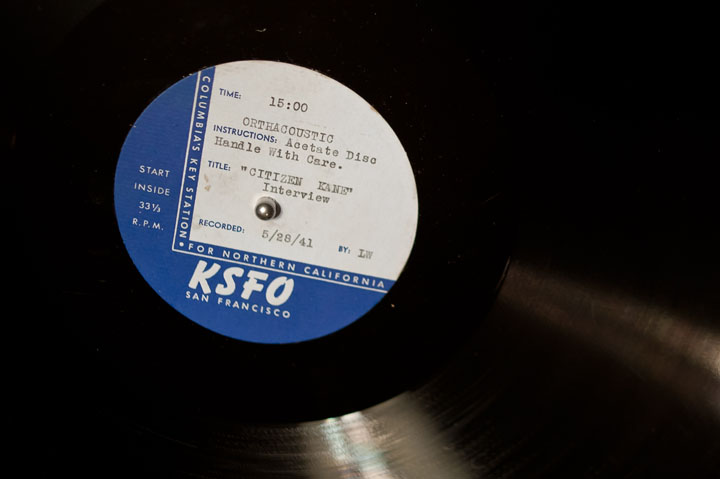 These lacquer discs originated as the Mercury Theatre on the Air’s working audio archives. After Welles relocated from the United States to Europe in late 1947, his colleague Richard Wilson took possession of the materials left behind in the group’s office, including the sound recordings. These materials were purchased in 1979 by the Lilly Library where they now comprise part of a larger collection titled the Welles mss.

The audio portion of this collection contains master, original recordings of numerous episodes of such canonical Welles series as Ceiling Unlimited, Hello Americans, This Is My Best, and various incarnations of the Orson Welles Almanac, including a prospective eight-part series for the Eversharp Pen Company that was never broadcast. Other highlights include an irreverent spoof of Macbeth recorded privately during a rehearsal in April 1940; a broadcast made shortly after the attack on Pearl Harbor, during which Welles was interrupted by a government blackout notice; and the most complete known set of The Doorway to Life, a Peabody Award winning program by Mercury Theatre member William Alland. Collectively, these discs constitute a unique audio record of the seminal broadcast work of Orson Welles and his Mercury Theatre associates during and immediately after the Second World War.

The Welles lacquers have serious preservation problems. The format itself is inherently unstable, subject to catastrophic degradation processes that can leave a disc with a lacquer coating that is delaminating (cracking and peeling), resulting in loss of the recorded signal. Forty-three percent of the Welles discs exhibit the characteristic white, oily sheen known as plasticizer exudation, which is considered a precursor to delamination. The lacquer coating is attached to a glass base on 31% of the discs and at least 26 of these items are already cracked or broken. Glass was used due to a shortage of aluminum during the war years.

We chose the Welles lacquers as our first collection because they are actively degrading, at very high risk for loss of content, and highly valuable for research, instruction, and entertainment. Other campus collections will follow. This is the first of many steps forward. 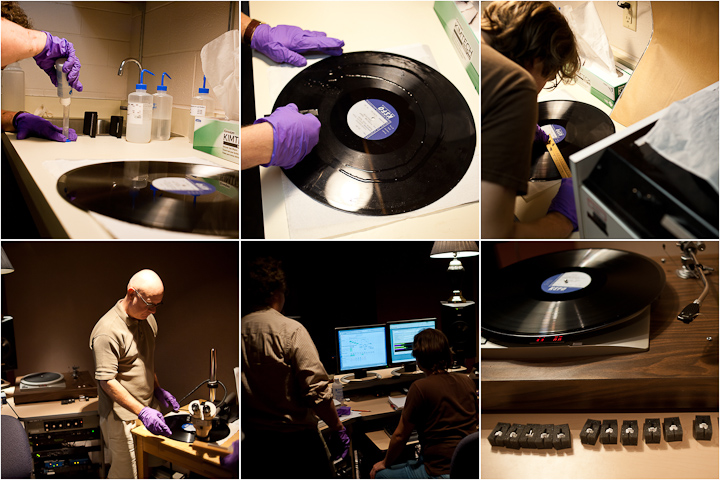